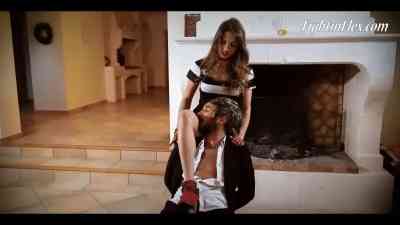 Agent Kayla Peel is a female special agent from MI6 with a license to kill. She comes in second generation of a famous family of special agents, who have saved the world many times from big terrorist acts back to the sixties. This time she is entrusted with a special task, to break into a mass destruction operation, which requires all her abilities, including those to seduce and to kill. Whenever the targets of enemies are males, and women’s weapons are needed to proceed, the best answer to come them over is a female and Kayla Peel is the best of all of them.

Chapter 2 : Tony, the boss of the terror unit gets wind off Kayla Peel’s investigations – he was informed by the forceful death of his friend in chapter 1 – and is warned about her family background. He gets to learn about Kayla’s mother, Emma Peel, which was famous in the sixties for fighting and beating criminals. We see him watching a video from secret MI6 files, which shows an operation of Kayla’s mother fighting and destroying goons in the sixties, including Tony’s own father…

Kayla is breathtaking again in our best 4-parts mixed fighting production so far, in a cute french dress and red gloves. Sexy, skilled, sadistic, Emma Peel will destroy all her opponents with her powerful kicks, fast karate chops and her legendary smile. Don’t miss our 4-chapters masterpiece, you won’t regret it.

This site uses Akismet to reduce spam. Learn how your comment data is processed.